What’s a Normal Spinal Curvature and What’s Not? 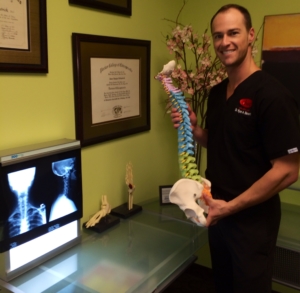 Your natural spinal curvature is important, and when this curvature is slightly to severely abnormal, you may experience anything from occasional, mild, annoying discomfort to severe pain and disability. Doctors refer to these abnormal curves as spinal deformities, and they include scoliosis, kyphosis, excess lordosis and flatback. If you suffer from any of these problems, contact a chiropractor.

The normal curvature of the spine looks like this:

When the spine is not vertically straight from the tailbone to the base of the neck, the condition is called scoliosis. The spine might have either a sideways C- or S-shaped curve. Scoliosis most commonly develops in adolescents, usually for unknown reasons.

Mild scoliosis may not require treatment, although chiropractors closely monitor the condition, but a severe curve may require a brace or surgery. Treatment sometimes includes exercises and physical therapy and spinal adjustments.

Less commonly, scoliosis can develop in adults. Osteoporosis can cause scoliosis, as can joint degeneration in the spine, although often the cause is unknown.

Treatment for pain caused by adult scoliosis typically involves medications, exercise, physical therapy and occasionally a spine brace. Surgery for adult scoliosis is rare and recommended only in severe cases where the spinal curve is causing other problems, such as compressing the lungs. Two common alternative treatments for scoliosis in adults and adolescents are chiropractic and massage therapy.

A spine with kyphosis curves back and outward in a C-shape. The thoracic spine has a natural kyphotic curve, but a curve of more than 40 to 45 degrees is considered abnormal kyphosis. The most common cause of kyphosis in adults is osteoporosis. Kyphosis is sometimes called roundback or dowager’s hump. Adult kyphosis can also be caused by traumatic injury, although the condition can develop for unknown reasons.

The most common type of kyphosis, which typically shows up during adolescence is postural kyphosis, and it’s often attributed to slouching. Postural kyphosis rarely causes pain and rarely leads to problems with age, according to the American Academy of Orthopaedic Surgeons.

Another type of kyphosis is congenital kyphosis, which affects infants. Congenital kyphosis typically means that a baby’s spinal column didn’t develop properly as the fetus grew. Babies born with this condition may require surgery at a young age.

Excess lordosis is too much inward spinal curvature. The condition most often occurs in the lower back, although the neck can also develop excess lordosis.

A common cause of excess lordosis in the low back is sitting a lot, which shortens the muscles in the front of the hips, pulling them forward and creating more curve in the lower back. Anything that pulls the hips forward, including excess abdominal weight, can cause swayback.

Chiropractors typically treat this condition with exercises and physical therapy and spinal adjustments. If you have this condition, chiropractic and massage therapy are often helpful.

If the spine has lost all it natural curves and is straight, the condition is called flatback syndrome or fixed sagittal imbalance. A person appears to be stooped forward and usually has difficulty standing up straight. The most common causes of flatback are spinal fusion surgery or surgery to correct scoliosis. If you have this condition, work with a knowledgeable chiropractor to determine the best treatment for you.